The American mushroom council along with the help of the press is encouraging the people of United Sates to use the diverse varieties of mushrooms that are available. The market for mushrooms seems to be seeing an uptrend with the spreading awareness among people about the nutritional value, gastronomic and health benefits of mushrooms.

Growing mushrooms commercially is a lucrative business as it has a prospective yield and it brings in substantial profit too. Mushrooms have a short life cycle and can be grown all through the year; consequently they can be harvested on a regular basis. Growing mushrooms needs no special qualification; all it needs is some awareness. Thus any individual can grow mushrooms with ease if she/he has understood the golden rules of growing the crop.

For beginners it is easy to grow oyster mushrooms as they grow on various substrates. Shiitake mushrooms are popular consumers and are in constant demand. Among mycorrhizal mushrooms, only the truffles and morels are popular. Growing mushrooms is completely different from growing other green vegetables. Unlike vegetables, mushrooms do not contain chlorophyll and thus are dependant on other plant material called substrate for their food. Different species of mushrooms require a particular type of growing medium though many mushrooms can grow on a large variety of mediums.

One full cycle to grow mushrooms takes about fifteen weeks though this period varies from species to species. The cycle includes:

Shiitake: They are the most popular mushrooms in Japanese cooking. They are available both as fresh and dried varieties. The dried variety has to be soaked in water before cooking it. Shiitake mushrooms are mainly used in dishes like nabe (hot pot) dishes, tempura and boiled dishes.

Matsutake: This variety of mushroom is very expensive and is a gourmet mushroom. These mushrooms cannot be cultivated and are available only in autumn season. They can be generally found beneath pine (Matsu) trees. They are considered highly prized if they are picked just ahead of surfacing with the umbrella still closed. They are consumed either after grilling or after they are cooked with rice.

Hiratake: Hiratake is the Japanese name for oyster mushrooms. Many varieties of hiratake are cultivated and they all look a little different from each other.

Maitake: One more popular variety of mushrooms used by the Japanese is maitake. They are cultivated in massive colonies and few of these varieties are referred to as the king of mushrooms.

Nametake/Enoki: Though they appear different, they still belong to the same variety of mushrooms. Nametake is the wild version while enoki is the cultivated version of the same mushroom type. They are very famous and most frequently used for hot pot.

Bunashimeji: This is another well-liked mushroom that is used widely by the Japanese in their cuisine. These mushrooms are cultivated.

Any variety of mushrooms is very nutritious and has medicinal properties too; they are a rich source of amino acids too. Mushrooms also have unsaturated fatty acids that are a source for B vitamins, Vitamin D. They also have a store of minerals such as potassium, calcium, magnesium, and phosphorous. Shiitake and white button mushrooms are a rich source of protein; white button mushrooms have more protein content when compared to kidney beans.

In the market gourmet mushroom varieties like the shiitake, enoki and oyster mushrooms are very highly priced. The best option to enjoy these mushrooms at lower cost is to grow them at home. Growing mushrooms at home has been made very easy with the availability of mushroom kits. There are a number of mushroom kits available in the market; you have to choose the one that best suits your purpose.

Mushroom kits include the substrate that is pre-inoculated with mushroom mycelia. An instruction pamphlet is also provided along with the kit, providing step by step instruction on how to go about. The most commonly available commercial mushroom kits are priced between US $20 - US $30.

Majority of the kits start fruiting within a week's time and you can expect a yield of 1-2 pounds of mushrooms per flush. Generally mushroom kits give 2-3 flushes of mushrooms prior to the depletion of the food supply. Finished kits should be left on the compost pile, there are times when you can get lucky and get a bonus flush of mushrooms.

When you get a new mushroom kit, ensure it free from unusual colored moulds else get a replacement from your shipper. The mycelia require an incubation period during which they colonize the entire substrate. The kit has to be kept moist and in an appropriate temperature. After this the kit is kept in refrigeration to compel the mycelia for fruiting and then the kit should be opened and exposed to sunlight. The best place for this is the garage or any protected place outdoors. While the kit begins to fruit, the humidity levels have to be maintained high. Usually all kits contain a plastic tent. Use the right type of water to get the best harvest from these kits - well water, spring water or rain water is the best.

According to Asian traditions, few mushrooms provide immense health benefits and Chinese doctors use at least 50 species of mushrooms for cure of various illness. There are 38,000 varieties of mushrooms in the world that are filled with nutrition, of which only a few have high levels of healing capability.

Maitake, shiitake, chaga, and reishi are the most well-known varieties of mushrooms that are used for medicinal purpose. They are being researched upon for their anti-cancer, anti-viral, bacterial, fungal and immunity-improving properties. These mushrooms also ease inflammation, fight allergies, assist in balancing and maintaining blood sugar levels, improve heart health and boost the detoxification process in the body.

Maitake mushrooms: Recommended for the stomach and intestine, and blood sugar

Extracts from psychedelic mushrooms have been used to prevent migraine headaches. This extract is being researched upon for its use on people suffering from mental diseases.

Top of the Page: Growing Mushroom 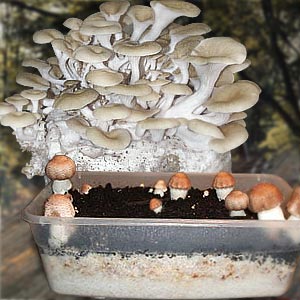 More on Work and Career

Working Woman - Best of the web on work ethic, work spirit and latest happenings on the work scene ...
Career Choices for Women - Career options, interview guides and tips ...
Career Assessment - Assess your skills to choose the right career ...
Career Counseling - How can a career counselor help you? ...
Behavioral Interview Technique Tips on Interviews to land on the plum job ...
Benefit of Telecommuting - Your virtual office ...


Top of the Page: Growing Mushroom